4399036
Give Me a Sign is the 15th episode of the second season and the 37th overall episode of Charmed.

When criminal mastermind Bane Jessup narrowly escapes an attack by a powerful demon, he kidnaps Prue and forces her to use her powers to save him.

These fairies are sworn to
the protection of the sea,
the creatures who dwell within it,
and those who travel upon it.
They serve the Masters of the Water,
and are endowed with power
over tide and storm, wind and current.
When angered, they are capable
of great destruction, but when appeased,
they guarantee the sailor safe passage home.

To identify the weapon, Darryl Morris had sought the help of the Charmed Ones. When Darryl handed Piper Halliwell the weapon, Phoebe noticed the etchings and claimed that it was definitely demonic. The two sisters consulted their Book of Shadows and found an entry on the weapon, illustrated with a drawing of the weapon and followed by and the entry on the Ordo Malorum.

This an example of
a type of weapon used
by Level Two Demons.

Commanding the demonic legions,
these generals lead the war
against the forces of good.

To ascend in the unholy hierarchy,
they must capture and conquer
those witches who protect
the innocent and value good.

The servants of these generals
(also known as Level Two Demons)
can be identified by the weapons
which they carry.

Piper and Phoebe Halliwell mentioned that the Book of Shadows contained an entry on Litvack, however, it's content remains unknown, except for that it didn't help the sisters learn more about him.

Phoebe casts a "Give-Me-A-Sign" spell for Piper, so she can decide between Dan or Leo. However, the signs also lead to where Prue is held captive by Bane. As the spell was not specific to Piper, it worked to find Prue. It also may not have worked on Piper because she already knew she still loved Leo.

Requirements: Crush and sprinkle the leaves of a dead rose over a piece of paper containing these words.

I beseech all powers above
send a sign to free my sister's heart
one that will lead her to her love. 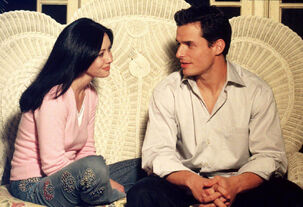 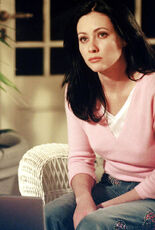 Piper: Okay. We have to keep trying until you do get a premonition. We have to figure out what happened to Prue.
Phoebe: Piper, that crack that I made about her becoming a photographer—I don't want that to be the last thing I ever say to her.
Piper: Phoebe, you're overreacting. That is my department. All you have to do is relax and concentrate. (The doorbell rings.) Here. Try the rag again.

Darryl: So much for keeping things quiet. This is a nightmare.
Piper: Welcome to our world.
Phoebe: You want some aspirin?
Darryl: What I want is Prue safe, Bane put in jail, and nobody hurt by any... (He sees the weapon on the table. He walks forward.) Do you know what that is yet?

(Prue tends to Bane's wound as he grunts in pain.)
Prue: If I'm gonna clean the wound, then I have to stop the bleeding. I'm sorry.
Bane: Do you even know what you're doing?
Prue: No, not really. But right now I'm the only choice that you've got. So just, try and hold still.
Bane: (grunts again) It's easy for you to say. You don't have a set of fingernails clawing into your body.

Prue: Okay, you know what? It's just gonna get infected. So, you can either take your pants off on your own or I can always do it by force.
(Bane reluctantly stands up as Prue smiles, clearly enjoying this.)

Piper: I don't believe this! We've been frantic, worried sick about you thinking you've been kidnapped...
Prue: Yeah, I was...
Piper: (points to the side of the bed) Panties.
Prue: Oh, oh! (She rushes to the bedside and picks them up.) Huh, thanks. Look, uh, you guys have really got this all, um… (looks at her underwear in her hand) wrong. (hides it behind her back)
Piper: Yeah, we know. It's a trap. (frowns)
Phoebe: A tall, dark, and naked trap.

Retrieved from "https://charmed.fandom.com/wiki/Give_Me_a_Sign?oldid=431578"
Community content is available under CC-BY-SA unless otherwise noted.