Meant to do great good deeds to become Whitelighters

The Jung and the Restless
A Future Whitelighter, also known as Whitelighter-to-Be, is a mortal who dedicates their life to helping others and doing tremendous good deeds that ultimately help them earn the right in becoming a Whitelighter upon death. Once they die, the Elders offer the one the opportunity to become a Whitelighter and continue helping people or move on to the afterlife.

However, should one commit suicide[1] or fail to achieve the good they are meant to do, they will be disqualified from ascension. For this reason, the council of Elders sometimes appoint a Whitelighter to guide them and help them "earn their wings". These mortals are sometimes targeted by Darklighters, sent to stop them from achieving their deeds, and through these acts, prevent good from spreading too widely.

While most are destined to become Whitelighters, some can earn this reward by doing a greatly good deed such as sacrificing their lives for the sake of the world, as was what happened for Kyle Brody.[2] 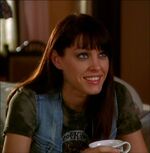 Future Whitelighters have appeared in a total of 8 episodes throughout the course of the franchise.

Retrieved from "https://charmed.fandom.com/wiki/Future_Whitelighter?oldid=407952"
Community content is available under CC-BY-SA unless otherwise noted.