Four Horsemen of the Apocalypse

Bringing about the apocalypse

The Source of All Evil

"If you save Prue, you will release the fourth horseman and bring about the end of the world."
—Leo to Piper and Phoebe.[src]

In the hierarchy of evil, the Four Horsemen of the Apocalypse are unknown evil beings that rank higher than demons. The horsemen are empowered by the the Source of All Evil and are charged with bringing about the end of the world through their respective personifications.

Each horseman represents and controls a certain destructive force, namely War, Death, Strife and Famine. When unleashed by the Source, the horsemen set out to cause destruction and chaos to instigate the apocalypse.

Only the Source of All Evil can destroy the horsemen. In each age across history, the horsemen have been tasked with bringing about the end of the world. However, each time they fail, they are destroyed by the Source and new incarnations are anointed.[2]

Encountering the Charmed Ones

In 2000, the sisters noticed an increase in violence in the city. While returning from diner, Piper and Leo witnessed a violent outburst on the street. When Piper froze the scene, she noticed a man, Strife, in a suit observing the situation. She chased after him, though Strife escaped by conjuring his horse and fading away.

Strife reunited with his fellow horsemen on a field, where he informed them about what had happened. The horsemen figured it might pose a problem, as they were nearing their deadline. War then decided to set a trap to kill her so they could move forward with the plan.

Portal to the Netherworld

The sisters searched the Book of Shadows and Piper concluded that they encountered the Demon of Anarchy. They then called Darryl Morris to find the hot spot of violence, as they figured that was where the demon was.

Once the sisters arrived, they spotted Strife and he lured them into an alley. Once there, War grabbed Prue while Strife cast a spell. Piper and Phoebe countered it with their own spell, causing a portal to open under War and Prue, sucking them both into the Netherworld between Good and Evil. The other horsemen then quickly retreated.

The sisters meet with the horsemen at the Halliwell Manor to figure out how to open the portal. Phoebe eventually figured out they unknowingly formed a pentagram, meaning they would have to reverse their positions and spells to open the portal. Meanwhile, Leo went to the headquarters of the horsemen and discovered the truth. He then informed the sisters that if they opened the portal, they would bring back the final horseman and unleash the apocalypse.

Piper and Phoebe, still determined to get their sister back, met with the horsemen in the alley. However, when Phoebe shook hands with Strife, she got a premonition of the apocalypse and realized they could not bring back Prue if it meant the end of the world.

Through this selfless act, the Source of All Evil's plan to bring about the apocalypse failed and he opened the portal himself to vanquish the horsemen. As they were being sucked in, Piper and Phoebe quickly cast their spell and managed to free Prue before the portal closed. The remaining horsemen were then vanquished for their failure. 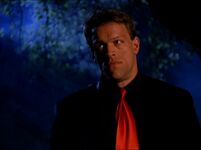 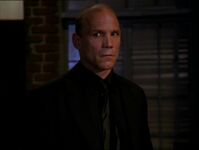 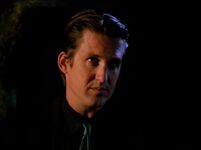 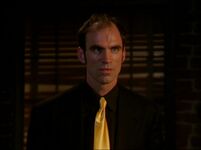 "Listen, they wear the mark of the anointed ones. The omega. It means the end."
—Leo Wyatt[src]

The Four Horsemen of the Apocalypse appeared in a total of 1 episode over the course of the series.

Retrieved from "https://charmed.fandom.com/wiki/Four_Horsemen_of_the_Apocalypse?oldid=431611"
Community content is available under CC-BY-SA unless otherwise noted.