Defensive Power
Force Fields are magical barriers used to protect one from physical and magical attacks. The ability to create force fields is often referred to as Shielding. This power is very rare and is only possessed by a few magical beings, who can be either good or evil.

Force fields can be shaped into various forms, though a sphere or bubble is the most common. They can shield the user from both physical and magical attacks. They can either deflect a magical attack back to the enemy, or absorb and neutralize the magic. They can also be used to capture and contain an individual or seal off a room or area.

The strength of a force field is dependent on the strength and willpower of the user. While seemingly indestructible, force fields can be broken through by several means.

Gideon cursed an athame, which allowed it to pierce through Wyatt's protective bubble. Once the bubble was successfully penetrated, it was permanently forced down.[5]

When a force field proves to be impenetrable, enemies can still teleport the field and those inside. While teleporting the field, it is required to stay in contact with it. Gideon was able to orb the protective bubble and Wyatt inside by channeling Electrokinesis into the bubble, establishing contact, and then orbed away with the bubble.[6]

Paul Rowe was the first being to display this power, which he used to shield himself and his brothers from the Charmed Ones and later to shield himself from Greg. His field negated Piper's power of Molecular Immobilization.[7]

The Source of All Evil was able to project an invisible force field around himself while he was entering Piper's mind. When Leo tried to approach him, the field manifested in a flash of flames and sent Leo flying back with force. However, sustaining the field as well as manipulating Piper severely weakened the Source.[8] Cole, as the Source, also used this type of force fields.[9]

Cole Turner used this power to create multiple force fields around his penthouse in order to keep Phoebe trapped there while he sought to gain access to the Nexus. While she was trapped, Leo could not hear her calls. However, the force fields were limited to the doors and windows, as Phoebe was able to call Leo once she escaped through a vent.[10] A similar form was used by Derek to keep Piper a prisoner when he wanted to retrieve his son from the Manticores.[11]

When Barbas tricked Paige into giving him Cole's powers from the Demonic Wasteland, Barbas used those powers to trap Phoebe and Cole, as well as Piper and Leo, in separate force fields of blue energy, leaving Paige to deal with him alone. The force fields were dropped when Barbas was stripped of his new powers with a potion.[12]

Certain users, such as The Woogyman and The Elders, can electrify their force fields. This type of force field can electrocute individuals, shocking them and throwing them back. These fields are often invisible unless touched, at which point they zap those in contact with it. It can also be used to seal entrances, preventing enemies from entering.

The Woogyman used this power to seal the Halliwell Manor to prevent people from entering. All doors and windows were sealed, as shown when Prue tried to enter through the door and Piper threw a brick at the window. They later entered the manor by freezing Andy as he was leaving. This power can be used on individuals, as Andy was able to leave the manor but Piper was not.[13]

The Elders displayed this power when they met with Zankou on the Golden Gate Bridge. Zankou attempted to touch Sandra, but was shocked by an electrified shield. It is unknown if this power is possessed by individual Elders or if it is activated as a collective.[14] 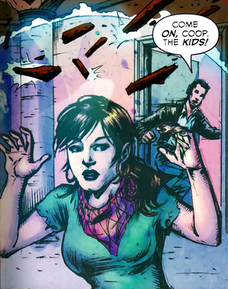 A variation of the power used to create an orb-based protective shield around oneself and others (so far, the Orb Shield was shown to protect four people at most). The shield — usually used in a form of bubble — can repel enemies and powers. Wyatt Halliwell was the first user of this power, and Paige developed this power few years later. However, Wyatt was shown to be able to create more forms of Force Fields than just an Orb Shield, probably due to his Projection power.

The Orb Shield can be manipulated by other powers. A demon hit the Orb Shield with a beam, which caused the bubble fly away, Gideon was able to orb the protective bubble with Wyatt inside, and Phoebe was able to lift it with her Levitation, while Piper moved it across a battlefield with her Molecular Acceleration.

A variant used to create a protective shield in front of a group or collective of beings uniting their powers. The shield is raised when the users hold out their hands. These shields block the powers from others and prevent them from penetrating the shield. When the shield is faced with incredibly strong powers, users might become unable to move or undertake other action.

When the Charmed Ones were trapped inside a magical cage, they used the Power of Three Spell to create a shield to protect themselves while forcing The Seer to tap into the Source's Heir's full power in order to destroy her.[15] One year later, when the Charmed Ones were turned into Goddesses, they used their newfound abilities to create a force field to protect themselves from attack and preventing the Titans from killing an Elder.[16]

The Zodiacs also have the power to shield themselves from harm with a purple force field. During a confrontation with Piper, four members of the Zodiacs pooled their power to create a protective circle around themselves to ward off her power.[17] 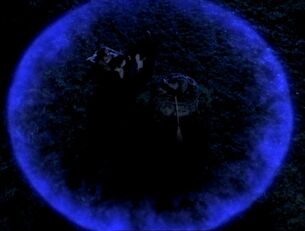 A variant used to create a force field by using natural magic through certain herbs and objects that harness and direct energy. It can replicate the effects of a force field to a limited effect, as it prevents beings and magic from entering the circle, but does not protect against objects such as bullets.

Certain magical objects and artifacts possess the power to project protective force fields. Some of these objects need to be activated by a user, while others possess the ability to activate themselves. This is often an automatic response to a threat to the object itself or those near it.

The demon Raynor once sent his brotherhood after two witches of the same coven, who were tasked with protecting two magical amulets. Each possessed the power to create an energy-based force field to protect the wearer from harm. However, the force field was penetrated by Belthazor, using his great physical strength to break through.[19]

The Chandelier in the Halliwell manor displayed the ability to cast a protective force field when the Power of Three was reformed in an alternate reality. The blue light that appeared from the chandelier formed a protective field that deflected an Energy Ball thrown by Cole.[20]

The Book of Shadows was shown to have the ability to protect itself with a golden energy-based force field when Zankou tried to steal it. It presumably developed this power as the Charmed Ones grew in strength, as it previously protected itself by moving away from threats. When an evil being tries to touch it, the book forms a protective field which shocks the threat.[21]

A Crystal Cage is an energy-based cage made out of five magical crystals. When the crystals are placed in the form of a pentagram, electric arcs rise up from the crystal and form a cage around the target. The cage traps those inside and prevents them from escaping. It can also be used to shock those inside for torture or interrogation.[22]

The Wicked Witch from the Magic Mirror once tried to kill the sisters by using fairy tales. She sent Phoebe Cinderella's glass slippers, which turned Phoebe into Cinderella when she put them on. The slippers guided her to the Pumpkin Carriage. While Phoebe could enter the carriage, Paige was thrown back by a blue energy field, meaning that only Cinderella was able to enter.[23]

Retrieved from "https://charmed.fandom.com/wiki/Force_Field?oldid=432841"
Community content is available under CC-BY-SA unless otherwise noted.