4398002
Dream Sorcerer is the 5th episode of the first season and the 5th overall episode of Charmed.

Overworked Prue battles a sleep demon in the guise of a handsome man, while Phoebe conjures a spell to attract men that turns out to be too strong - the sisters can barely escape their myriad admires.

To draw a love

Place heated spices in a
velvet bag with a record
of your ideal desired.

To drive away a love 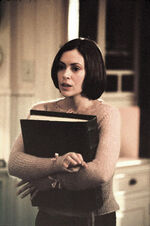 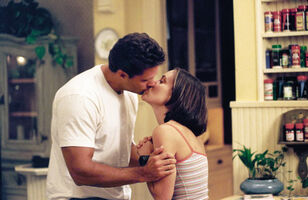 (In the Manor, Piper is watching an exercise video and trying to copy what they're doing. Prue is sitting in a chair.)
Piper: Uh, I give up. Two weeks and nothing strengthened but my temper.
Prue: Piper, here's the problem. You didn't read the fine print. See. It says right here. $19.95 for the video and twenty grand for the plastic surgeon.

(In the Manor's Kitchen, Piper is cutting up some vegetables. Prue walks in.)
Prue: Piper? Phoebe?
Piper: Prue. You're in home. I thought you had a date with Andy.
Prue: Uh, no. He had to cancel. What are you doing?
Piper: Hmm...
Phoebe: (from the other room) Piper, I was wrong. The spell calls for cayenne pepper, not black pepper. (She walks in the kitchen and sees Prue.) Ooh. Did I say spell? I ... I meant recipe. We are so busted, aren't we?
Prue: I would say yes. What spell are you casting?

Phoebe: You want a man who is single, smart, endowed?
Piper: Employed.

(A handsome guy enters the kitchen wearing no shirt.)
Hans : Morning.
Prue: Uh, excuse me but who are you?
Piper: Who cares?
(Hans gets a bottle of milk out of the fridge and drinks it all. Phoebe comes in.)
Phoebe: Hans, I found your t... (She sees Piper and Prue.) shirt.

(In the attic, Phoebe's looking through the Book Of Shadows.)
Piper: Nothing?
Phoebe: Nada.
Piper: There's got to be something.
Phoebe: I'm telling you. There's no Dream Sorcerer stuff anywhere.
Piper: That's impossible. The Book of Shadows has never let us down.
Phoebe: Well, maybe he's not a demon. Maybe he's a mortal.
Piper: Then he's got one hell of a power.
Phoebe: You're not kidding.

Retrieved from "https://charmed.fandom.com/wiki/Dream_Sorcerer?oldid=437985"
Community content is available under CC-BY-SA unless otherwise noted.