Forget Me...Not
Dragons are ancient and powerful magical beings. The race of dragons has become near extinct, but they are still present in modern fiction and fantasy.

In 2000, the Council sent a Dragon Warlock, the twisted offspring of a dragon and a sorceress, after the Charmed Ones. Much like his reptilian ancestor, the warlock was capable of flight, super strength and breathing fire. He was eventually vanquished with a Power of Three spell by the sisters.

Wyatt Halliwell once conjured a fictional dragon out of a TV program, which proceeded to create havoc around San Francisco for several hours. This exposure of magic caused the Cleaners to take Wyatt away and erase all memories of the event. The Charmed Ones later got Wyatt back and he undid his conjuration when the dragon threatened to hurt Piper.

Years later, Wyatt conjured a dragon again at Magic School after the meeting of Prue and Paige caused the Warren magic to go haywire. 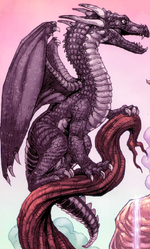 Dragons have appeared in a total of 1 episode and 1 comic issue throughout the franchise.

Retrieved from "https://charmed.fandom.com/wiki/Dragon?oldid=411849"
Community content is available under CC-BY-SA unless otherwise noted.