Awakens the powers of the Charmed Ones.

The Charmed Ones to be present in the same house

Good Magic
Dominus Trinus is a spell located at the front of the Book of Shadows that was specifically created to unbind the powers of the Charmed Ones.

Unbinding the Charmed Ones' Powers

In 1998, six months after the death of their grandmother, Prue, Piper and Phoebe Halliwell were reunited in their family house, Halliwell Manor. When Phoebe returned from New York, she and Piper played around with a spirit board that belonged to their mother Patty.

Phoebe was known for pushing the pointer, but on that night, the pointer moved on its own and spelled out ATTIC. Prue believed it was just Phoebe doing it, but Piper had seen the pointer move by itself. Phoebe later went to the attic and the door magically opened after being sealed off for years. As she entered the attic, a light shone upon an old trunk. She opened the trunk and found the Book of Shadows.

When she opened the book, she read out this incantation, which caused a blue light to shine from the chandelier and unbound the powers of the Charmed Ones, as well as their collective power, the Power of Three.[1]

When Piper became trapped in an alternate dimension and Paige became stuck in limbo, Phoebe wrote a variation of the Dominus Trinus in order to invoke The Power of One to telepathically communicate with them.[2]

While Paige was on the verge of death, the Book of Shadows inadvertently casted this spell and shifted the bond of the Charmed Ones back to the original sisters. Due to Prue being the only candidate for the Power of Three to shift to, she became Charmed once again, albeit temporarily.[3]

Hear now the words
of the witches,
The secrets we hid
in the night.
The oldest of Gods
are invoked here.
The great work of
Magic is sought.
In this night
and in this hour,
I call upon the
Ancient Power.
Bring your powers
to we sisters three!
We want the power!
Give us the power!

First version from the Unaired Pilot

Hear now the words
of the witches,
The secrets we hid in the night
The oldest of gods are invoked
here,
The great gift of magic
is sought
In this night and in this hour
We call upon the ancient
power
Bring your power to
we sisters three!
We want the power!
Give us the Power!

A scan of the page from the magazines. 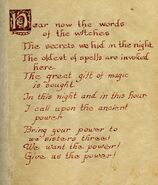 A scan from The Sourcebook.

The entry seen in Valhalley of the Dolls, Part 1.