Charmed
Register
Don't have an account?
Sign In
Advertisement
in: Warlocks, Characters, Killed/Vanquished by the Power of Three,
and 3 more

Become the ruler of evil

Muse to My Ears

" Aren't you tired of living under demonic rule, of being a second class citizen? My friend, in the coming days we must rise above our differences if we are to reach the level of our convictions."
—Devlin to Jackson.[src]

Devlin was a powerful and cunning warlock who sought to take over the Underworld when the Source of All Evil was injured. He obtained the Ring of Inspiration to steal Muses and make himself stronger.

Devlin realized that while the Source was recovering after being injured by Cole Turner during his attempt to trick Piper into giving up The Charmed Ones' powers, he had a chance to seize the throne for himself. He formed a faction of warlocks, whose all killed demons and took their powers. Under the normal hierarchy, warlocks were forbidden from attacking demons, though they were able to get away with it due to the Source being gone.

Through unknown means, Devlin obtained the ring of inspiration and began stealing the muses from good people. He then used the muses' influence to inspire and empower his faction.

Attack on the Charmed Ones

Devlin set his sights on the Charmed Ones, since killing even one of them would mean automatic succession to the throne. He convinced one of his warlock associates, whom had obtained the power of glamouring from a demon, to impersonate Leo and attack the sisters.

When he failed, Devlin looked for a second warlock to aid him. Meanwhile, the sisters' muse Melody alerted the sisters about what Devlin was doing. She inspired Paige to orb the ring away from Devlin, which succeeded. The second warlock attacked first and got vanquished, but Devlin appeared straight afterwards and reacquired the ring.

Before his third and final attempt, Devlin inspired his entire faction to take part in an ambush at P3. However, the sisters discovered a way to smoke out the warlocks and managed to vanquish three before the others escaped. Unknown to them, Devlin escaped and glamoured into Melody. Once they got into the alley, he placed his hand on Phoebe's face and began killing her with a Touch of Death. Before he could succeed, Cole knocked him down and Piper threw a flash potion, preventing him from blinking away. Devlin glamoured back into his true self and Piper tried to blow him up, though he was able to reconstitute himself. The sisters then vanquished him with a spell, ending this threat and freeing the muses.

Powers via the Ring of Inspiration

Evil is a faithful foe,
But Good does battle best.
We witches will, with these words,
Waste this Warlock's evil zest. 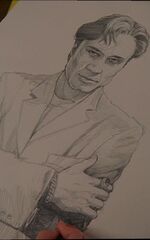 Devlin appeared in a total of 1 episode throughout the course of the series.