4398005
Dead Man Dating is the 4th episode of the first season and the 4th overall episode of Charmed.

Prue tries to avoid a birthday celebration as Piper befriends and saves the restless soul of a ghost who was murdered by a gang leader. The sisters save his soul and learn a valuable lesson. 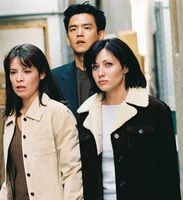 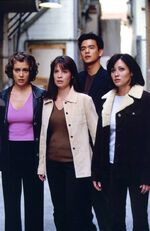 Prue: Andy, hi.
Andy: I was no where near the neighborhood, thought I'd stop by.
Prue: Honest man, I like that.

(Yama appears in the distance. He's on a horse which is galloping straight toward them.)
Mark: Yama!
Piper: Yama? Run.
Mark: It's too late. You better go. Run! (Piper freezes Yama.) What happened?
Piper: I'm a good witch, remember?
Mark: But how?
Piper: I don't know. I panic, I put up both hands and bad things tend to freeze.
Mark: For how long?
Piper: Not very, let's go.
(They run down the alley and Yama unfreezes. Yama's eyes glow bright green.)

(Outside the police station. Piper walks out of the station and over to Mark, who is standing beside her car.)
Piper: Okay, all set. I snuck the photograph into Andy's inter office mail.
Mark: My afterlife's in the hands of a cop named Andy.

(Tony fires his gun and Andy shoots him. Prue, Piper, Phoebe and Mark walk out onto the balcony.)
Piper: I've never seen anybody killed before.
Prue: Jeremy.
Phoebe: Javna.
Piper: I mean human.

Piper: (crying) Leave it to me to fall for a dead guy.
Phoebe: It's an improvement. At least he wasn't a warlock.
Piper: Yeah.