4301801
Charmed Again is the first part of the season 4 premiere and the 67th overall episode of Charmed.

Phoebe and Piper grieve over Prue's death and struggle with the demise of the Power of Three until they discover the existence of half-sister Paige, a Whitelighter.

This spell was cast by Piper Halliwell in hopes of bringing her recently deceased sister, Prue, back to life. It requires you to put rosemary, cypress and yarrow root into a silver mortar. The outcome of the spell actually contacted Paige Matthews, and it came out as a form of a newspaper, about Prue's obituary.

This spell was used twice by Piper Halliwell. Not long after the funeral of Prue Halliwell, a distraught Piper goes up to the attic in hopes of communicating with her deceased sister, however, Penny answers the call instead. She used it a second time to summon Grams and eventually, Patty.

Hear these words, hear my cry,
Spirit from the other side,
Come to me, I summon thee,
Cross now the Great Divide.

To Call a Lost Sister

This spell, was used and created by Piper Halliwell. It is a combination of the Dominus Trinus spell and what is desired. The last two lines of the original one are replaced with the fact that Piper wanted to bring her sister back to life, however it doesn't work and therefore fails.

To Send One Away

This spell was used by Phoebe Halliwell and Penny Halliwell in order to remove Inspector Cortez from the manor after catching them using supernatural magic. The spell at the end, sends him off to Timbuktu, in which Cole retrieves him later on the next day.

This spell was used, at first by Phoebe Halliwell by herself, when protecting an innocent known as Paige Matthews. Cole weakened him enough to the point Phoebe was able to chant the spell, and wound him. It was cast once again, however Piper and Paige chanted it with her, thus reconstituting the Power of Three and vanquishing Shax once and for all. 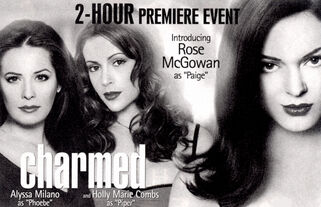 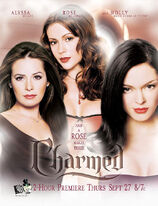 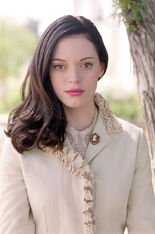 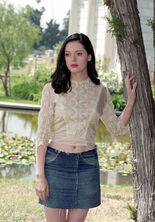 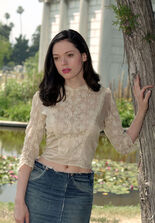 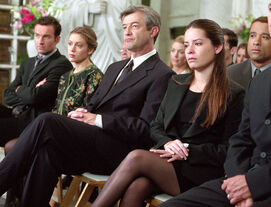 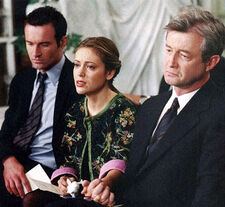 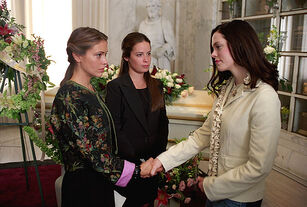 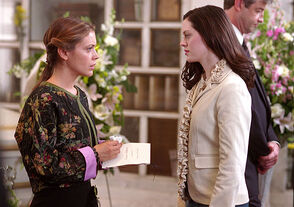 Piper: I'm not angry. I am pissed off! Don't you understand? You healed the wrong sister! You saved me because I'm your damn wife, and you should've saved her because she was the best! Because she... you should... Why did they put us through so much for it to end this way?

Piper: No, Leo, I won't. I don't want to do this anymore, okay? It-It's over! You can tell them that we buried their precious Charmed Ones when we buried our sister.

Paige: Yeah right. "Hi. I think your Mom might've abandoned me at birth. What's for dinner?" No. I don't think so.

Piper: No. You were trying to get yourself killed, which is what this family does best is get killed. Isn't it obvious by now that our only destiny is to die? And you are making it way too easy for them, Phoebe. You are just walking right into it!

Grams: All right, fine, you've caught us. Congratulations. So, what are you going to do about it? shoot us?
Phoebe: Easy, Grams! Not all of us are dead, remember?

Phoebe: Uh, er, we... call the spirits, to help undo, and... send him off to... Timbuktu! (Inspector Cortez disappears) Woah, it worked!
Piper: Timbuktu? You send him to Timbuktu?!
Phoebe: All right, well, it was the only thing that I could think of that rhymed with "undo"!

Cole: And I thought my family was screwed up. (Piper glares at him)

Cole: You know, it doesn't solve your problem. He's gonna wake up eventually. You just bought yourselves some time.
Leo: Which you're gonna need. Especially if you wanna save your... (hesitates)
Phoebe: Sister?

Phoebe: It's not enough. Shax was just the messenger. We need to get The Source.
Paige: The source of what?
(Phoebe and Piper exchange nervous glances)
Piper: Of All Evil.

Retrieved from "https://charmed.fandom.com/wiki/Charmed_Again,_Part_1?oldid=443483"
Community content is available under CC-BY-SA unless otherwise noted.