"Don't let them make you forget why I'm doing this, Phoebe. It's supposed to hurt. Go to the Book. Remember all the losses. Then go to Zankou."
—Leo to Phoebe

Charmageddon is the 13th episode of the seventh season and 147th overall episode of Charmed.

The conflict-free Utopian world can only be protected if the Avatars control who lives and dies. Leo gives up his life when he is unable to persuade the Charmed Ones that the Avatars kill innocent people. 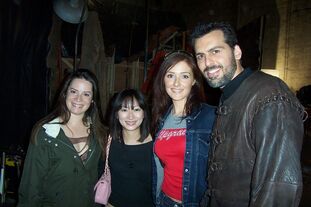 Retrieved from "https://charmed.fandom.com/wiki/Charmageddon?oldid=437776"
Community content is available under CC-BY-SA unless otherwise noted.