A big tome with a green leather cover, two markers and the Triquetra symbol on the front

Informing the owner(s) on demons and other magical beings, aiding them with spells and potions and other useful information about the craft

The Warren Line of Witches

"The Book will grow as you grow. Sometimes you'll add to it, and sometimes it teaches you."
—Melinda Warren to the Charmed Ones.[src]

The Book of Shadows, often just referred simply as the Book, or the Halliwell Book of Shadows, is the magical tome of the Warren Line of Witches. It is the most powerful and coveted Book of Shadows in existence and is over 300 years old. The Book has been passed down every generation ever since it was created by Melinda Warren in the 17th century.[1]

Besides information about the craft, the Book contains many entries on several beings from the magical community, including demons, warlocks, and other evil beings. It also contains many spells and potion recipes, most of which were written by Penny Halliwell.[2]

The Charmed Ones' book was started by Melinda Warren, the progenitor of the Warren/Halliwell line of witches, and is dated with the year "1693" written on its cover page. This actually creates a small continuity error within the series, as Melinda is known to have died in 1692; however it is possible that she created the book, and her daughter Prudence started adding to it after her death. Although it was fairly small then, each succeeding generation of Warren witches had added numerous pages to it, including information that they came across and felt necessary to be recorded for future generations of Warren/Halliwell witches. Among the earliest entries added to the book when Melinda was alive is a curse, possibly along with the entry which details the coming of the Charmed Ones in woodcuts (which is mentioned by Phoebe in Something Wicca This Way Comes...?), though this could've been done by a future descendant. After Melinda was burned at the stake, the book first passed to her daughter Prudence before then being inherited by each generation of her descendants.

Penny Halliwell often noted that she created most of the potion recipes in it (as Evil Witch Vanquishing Potion), though the only other entries we know for a fact that she wrote were the entries on the Necromancer, the Ice Cream Man, Gammill, The Collector, and Eames. She also possibly wrote the Belthazor Vanquishing Spell, Upper-Level Demon Vanquishing Potion and the spells To Increase Patience, To Unbind a Bond, To Bind, To Call the Halliwell Matriarchs and Nicholas Must Die.

Patty Halliwell added text on Barbas, the Demon of Fear, as well as the page on how to properly raise and nurture magical children. ("From Fear to Eternity," "Reckless Abandon," "Happily Ever After")

The Charmed Ones themselves have also added a significant number of pages to the book, including information, spells, and potions for future generations of good witches. Piper added notes on the Charm of Confidence after her first attempt at casting the spell on a nervous and insecure waiter at Quake backfired as a result of her doubling the ingredients. The first spell they added themselves was "The Woogyman Spell", or how to banish the Shadow of the Nexus. Phoebe also added a page on Cole Turner, Belthazor's human half, including personal information like his favorite food and hobbies; "anything that could help future witches" after he'd broken her heart. This was reminiscent of the alterations Penny made to the Necromancer page, adding such things as "likes Clarke Gable movies" to aid in her getting over the end of their romantic relationship. Additionally, Phoebe wrote an entry on the warlock Anton. Prue added her own Animal Conjuring Spell before her untimely death. ("Is There a Woogy in the House?," "Pardon My Past," "Look Who's Barking," "Necromancing the Stone", "Sympathy for the Demon")

A few spells in the Book of Shadows are used for personal gain. No explanation has been given to why such spells would be in the book, but it's likely that these spells were added to teach future witches about the consequences of personal gain, or because they served a magical purpose to deal with evils of the time.

At the end of the series, Piper, Phoebe, and Paige added their own entries regarding what they've been through in their years as the Charmed Ones in order to pass down the knowledge to future generations. ("Forever Charmed")

Leo added the entry titled, "Tips For Future Whitelighters", which detailed information about Whitelighters and how to properly use their powers in case he wasn't around to teach his sons Wyatt and Chris himself.

At the end of the series, when we are given a glimpse into the future, Wyatt and Chris Halliwell can be seen making a potion with the book laying aloft the table top. It can be assumed that the sisters retire from their demon hunting, allowing their progeny to continue the Charmed Ones' destiny.

Attempts at stealing the Book of Shadows

Over the course of the series, there have been 8 attempts at stealing the coveted Halliwell Book of Shadows. Although some were successful in obtaining the Book, the Charmed Ones were able to recover it each time in the end.

The Book of Shadows is very large, about the size of a dictionary or encyclopedia volume. It is bound in green leather, and the front cover has a symbol composed of an interlocking triquetra and circle on it, symbolizing the Power of Three and the Warren/Halliwell Family of Witches. Despite being three hundred years old, the book is actually in very good condition, although the pages have yellowed somewhat with age.

The book's pages are written in ink by hand. Each entry has its titles spelled out in elaborate multicolored calligraphy. The book is written by the whole Warren/Halliwell line, throughout the generations, and possibly by also very close friends. The book contains many illustrations, particularly drawings of demons and other magical creatures so they can be identified by those who have access to the book. Most of the book is in English, but some of the spells within it are written in Italian and Latin.

The book's organization is haphazard at best. The sisters have remarked on several occasions that they searched "the entire book" when looking for specific information, which suggests that the book's previous owners simply filled in the pages sequentially rather than arranging the contents topically. However, given that the Book of Shadows is a collaborative work with contributions by over three centuries worth of Warren/Halliwell witches, a topical organization was likely a practical impossibility.

Since it was inherited by the Charmed Ones, the book has grown three times its original size.[7] This means that the sisters themselves have added a great amount of spells, potions, and notes to the book, possibly more than any other generation as a result of the sisters possessing the Power of Three. They also occasionally wrote down their experiences after vanquishing a demon, which Billie mentions this when she studied the Book of Shadows.[8] Some notable entries include:

The Book of Shadows it is known for the fact that it cannot be touched by evil, this is thanks to shielding and sensing powers with which it was blessed. As a result of this blessing, the book cannot it be taken out of the Halliwell Manor unless it is in the possession of the Charmed Ones, good magical beings, or non-magical mortals. This is particularly important to note, as many evil beings covet the book, both because of the power it holds and because taking it would make the Charmed Ones much weaker and more vulnerable. However, despite the fact that it is protected by good magic, evil has still managed to find ways around this and have captured the book several times.

The book is tied very closely to the Charmed Ones' powers. For example, when Rex Buckland blackmailed them into giving up their Wiccan powers, the Book turned blank immediately after they cast the Relinquishment Spell. However, when Leo healed and restored the Book, their powers were restored as well. ("Wicca Envy") This bond between the Charmed Ones and the Book of Shadows is not infallible, though, as evidenced when the Angel of Destiny offered to take away their powers in the Season 4 finale, "Witch Way Now?"-- he said the book would not be harmed, and it would pass down to a future descendant.

It can be presumed that the book's magic varies as it is passed on from one generation to the next, depending on its new master's magical state.

Also, if one of the Charmed Ones turns evil through a dark wedding to a warlock, the other two will become evil as well, and the evil will flow through the book (although in later episodes, when one sister has turned evil, the other two did not succumb to it). Dantalian, a high-level demon priestess, realized this loophole and tricked Prue into marrying a warlock, Zile, to try to hijack their power for her own gain. This successfully turned the three sisters evil as expected, which enabled Dantalian to briefly steal the book. In addition, the book's original pages also transformed to those for evildoings. The plan backfired when evil Piper and Phoebe vanquished Zile, breaking the evil bond and restoring the Book to normal. ("Bride and Gloom")'

In season four, in the episode "Hell Hath No Fury", Paige tried to copy the book on a photocopier, but because of its protective magic, every page came out blank.

The book has a different protection mechanism against evil. In several episodes, various effects resulted from an evil magical being tried to take the book for themselves, including: jumping off the stand in "Once Upon a Time" and "The Seven Year Witch", repelling the being away from the book in "Death Becomes Them", projecting a spherical shield around the Book in "Death Becomes Them", burning the user's hands in "Imaginary Fiends", and so on.

In "Thank You For Not Morphing", an evil shapeshifter was able to touch the book and take it as far as the front door before it repels itself from his grasp, preventing him from walking out the front door with it in his grasp. In future episodes, it is established that it is impossible for evil to even touch the book; however, since the Charmed Ones had just recently received their powers at this time, their magic wasn't strong enough to allow the book access to the full extent of its protective magic.

For a demon or half-demon to be able to touch it without triggering its defensive properties, the being must have purely good intentions in his heart. According to one of the videos below, the magic the book possesses came from the deceased family ancestors who then become part of the book, which is presumably how it became so powerful throughout the centuries.

There are four books in total; 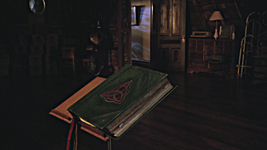 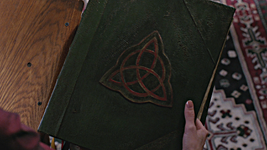 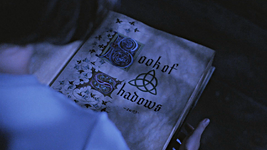 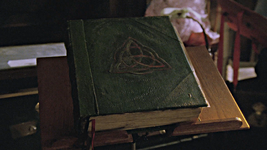