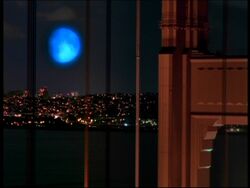 A blue moon is a phase that traditionally loosens the bonds of magic, on the three days when the blue moon rises. It can wreak havoc with all magical forces, causing witches' powers to become erratic and unpredictable or even ineffective. However, this is only temporary and only lasts while the blue moon is present.

While some witches may find the ties between themselves and their powers weakened, the Charmed Ones will have an added worry, because not only will the ties between each sister and her powers lessen, but each sister's bond to each other will be weakened as well, thus weakening the Power of Three as a whole, which makes it easier for evil to attempt to destroy it. It is imperative that the Power of Three be guarded on this day.

Influence on the Charmed Ones

On the second blue moon of a year (this only occurs once every fifty years), the Charmed Ones turned into werewolf-like creatures and attack beings of good magic, most likely Elders and Whitelighters. Aside from the transformation, Piper's temper will increase, making her easily angered and her power of Molecular Combustion randomly blow up anything in her surrounding. Meanwhile, Phoebe saddens easily. Since her power is passive, she didn't show an unstable use of it, though she did suffer from violent and painful nightmares (presumably from her Premonition power). And Paige gets jumpy, which causes her to orb out and then back again on the same place and loses control of orbing objects easily. All of this passes after the last night of the blue moon.

Retrieved from "https://charmed.fandom.com/wiki/Blue_Moon?oldid=413863"
Community content is available under CC-BY-SA unless otherwise noted.