4399033
Awakened is the 12th episode of the second season and the 34th overall episode of Charmed.

Prue and Phoebe ignore the code preventing witches from using spells for personal gain when Piper comes down with a mysterious life-threathing illness.

Troubled blood with
sleep's unease
Remove the cause
of this disease
Sleep eternal, nevermore
And shift the source
of illness borne
To this poppet whom
none shall mourn.

What was awakened
from its sleep,
Must once again
slumber deep.

Return the disease
to whence it came.
So life can ease
back to the same. 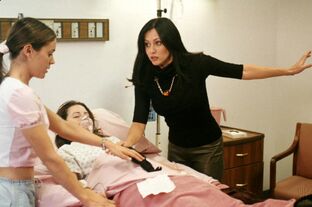 (The doctor leaves. Phoebe sits on the bed. Prue and Phoebe stare at her smiling.)
Piper: I'll be okay.
Prue: Yeah, I mean he didn't seem too worried. Just prescribed antibiotics.
Piper: The tests are just to confirm his diagnosis I'm sure.
Prue: Yeah, don't you agree, Phoebe?
Phoebe: I think we should call Leo.
Piper: Why?
Phoebe: Why not? He can heal you.
Piper: No. He's out of our lives. He's not even our Whitelighter anymore. Besides with Dan in my life.
Phoebe: But if Leo knew you were sick.
Piper: No, and that's final. No demon or warlock did this to me. Just let the doctors do their magic.
Phoebe: I just wanted you to get well soon. (Phoebe rests her head on Piper's stomach.)
Piper: I know and I will. Now you get outta here. Prue, go to Buckland's, Phoebe, go to wherever it is you got to and someone please call Dan so he doesn't worry.
Prue: Okay. Bye. Love you. (They leave.)

Piper: You have to reverse the spell.
Phoebe: No, Piper, we can't reverse the spell because…
Prue: You could go back into a coma, you could die.
Piper: I'm not gonna die. Just reverse the spell and call Leo so he can heal me.
Phoebe: Leo? I thought you didn't want us to call Leo.
Piper: Well, yeah, that's when I thought I was sick, not dying.
Prue: Piper, um, we already talked to Leo, he's not allowed to help.
Phoebe: They won't let him.
Piper: Oh. Great. Well thanks for doing something I specifically asked you not to do.

Piper: Hey.
Leo: Hey. How are you feeling?
Piper: Okay. A little tired. Which is actually a good thing. Leo, thank you for everything you...
Leo: Couldn't let you die, Piper.
Piper: I'm very glad you couldn't. Did you get in trouble?
Leo: Yeah, actually, a lot. They found out what I did. They clipped my wings.
Piper: What?
Leo: It's not permanent. It's more like a suspension... I hope.
Piper: Leo, I-I-I don't know what to say.
Leo: You don't have to say anything. You didn't do anything, I did. I guess in the back of my mind I always hoped someday, somehow you and I would get a second chance.
Piper: I'm with Dan now.
Leo: I know. But I also know now that I'm a mortal, I'm gonna fight for you. May the best man win.

Retrieved from "https://charmed.fandom.com/wiki/Awakened?oldid=433618"
Community content is available under CC-BY-SA unless otherwise noted.