View source
watch 01:11
Charmed Lore: Avatars
Do you like this video?
Play Sound

"With good there is always evil, so the battle never ends. Not until there is nothing left. That is the future your fight is leading to. Not good, nor evil, only nothing."
—Alpha about the battle between good and evil.[src]

The Avatars are an ancient group of extremely powerful magical beings who can bend the fabric of space-time and reality itself. Unlike other magical beings, their power is said to be unlimited, beyond good and evil. Avatars are not categorized as good or evil; they are neutral. Their desire is to shape the world to their own design; a perfect world or Utopia.

The Avatars are depicted as a peaceful, yet powerful collective whose sole purpose is to create their version of Utopia, a world without evil. However, as discovered by the ancient Egyptians and the Charmed Ones, the price of this perfect world is free will. Despite their devotion to the cause, the Avatars are capable of knowing when the world is not ready for them, and do not force the change upon the world.

Avatars increase their ranks and power by inviting other beings into their collective. As a general rule, they do not force others to join them. Rather, they make their presence known using subtle methods, where those they approach are expected to understand the Avatars at their own pace.

At one point in time, Avatars ruled over the entire world, but eventually an Egyptian mage named Anubis realized something was wrong and he created a very powerful potion which was the only thing able to destroy them. This potion forced the Avatars to retreat for centuries, as the death of one member would weaken the entire collective, leaving them vulnerable.[1]

The Avatars reappeared in late 2002 when Alpha and the Avatar of Force came to Cole Turner and asked him to join their ranks. Cole initially rejected their offer and attacked them, though they were impervious to his energy balls. The Avatars did not fight back, stating that Cole had nowhere else to turn and that him joining them was inevitable.[2]

After Paige unsuccesfully tried to vanquish Cole, he became convinced that she was the reason he and Phoebe weren't together. Despite their warnings that their power should not be used for personal gain, Cole joined the ranks of the Avatars and altered the world so that Paige never joined her sisters. However, Paige was accidentally transported there as well.

In this altered reality, Cole was still Belthazor and together with Phoebe, though she did not love him in this reality either. Alpha warned him about his vulnerable state, though Cole refused to listen. He was then vanquished by Phoebe after Paige reunited her sisters.[3] Losing Cole seemingly forced the Avatars to retreat once again.

After Gideon tried to kill Wyatt Halliwell for the greater good, Leo became obsessed with hunting down his accomplice Barbas. The Avatars, as floating heads, manipulated Barbas into going after Chris while pressuring Leo to hunt down Barbas. When the sisters vanquished Barbas, he angrily screamed at the Avatars that they set him up. Meanwhile, when Leo asked the Avatars what they wanted, they replied that they wanted him.[4]

When Leo was starting to be drawn back to his family and the side of good, the Avatars vanquished a group of Possessor Demons and ordered their leader to possess Leo. The demon attacked Piper, though she realized that it wasn't really Leo. The demon then attacked the Elders at Magic School until the sisters expelled him from Leo with a potion. When Odin zapped Leo with lightning, the sisters transformed into beasts under effect of the Blue Moon. They attacked Odin, though he was able to fend them off. When the sisters woke up, Odin revealed he had sent Leo away.

However, when the sisters threatened to stop helping them identify the new power, Odin reluctantly returned him. The sisters confronted the Possessor Demon, though the Avatars vanquished him before he could reveal anything.[7]

The Avatars kept tormenting Leo as the floating heads. When they realized it was not working, Alpha decided to try another way. When Piper and Phoebe convinced Leo to undergo a Vision Quest, Alpha hijacked his quest and explained that they were trying to get Leo to see the truth, that the eternal conflict between Good and Evil would only lead to death and destruction. He then explained their plan to create Utopia.

Their conversation was cut short when Alpha sensed the deaths of Piper and Phoebe at the hands of Sarpedon. When he found them dead in the manor, Leo agreed to join the Avatars in order to save them. Alpha then granted him the powers of an Avatar and Leo was able to resurrect them.[8]

Not long after, Leo began raising high faith for the Avatars before the Halliwell sisters, seeking to create a better world. The Avatars then sought out the disenchanted demonic seer Kyra, granting her a vision of their Utopia to explain to the sisters, which she would show Phoebe in return for being turned human.

The powerful demon Zankou, who knew the Avatars' world would be far less than suitable for demons to thrive at all in, caught up to and killed Kyra for her betrayal in short time. This was actually the final straw for the sisters, who, having long desired a normal life, finally agreed to go along with the Avatars' plans. Utopia was then created, a new world order under the watch of the Avatars. Afterwards, Leo checks with the sisters to see if Utopia has met its promises. However, Leo witnesses that the Avatars are maintaining Utopia in an unexpected manner. They are simply removing anyone who creates conflict from existence. Alpha, the representative of the Avatars, explained that they had modified the way people think, so as to allow people to more easily accept Utopia.

Unfortunately some people were beyond hope, and their inner demons began to surface, driving them to cause conflict. This in turn drove the Avatars to deal with the resulting chaos to protect Utopia. Leo asked if they were killing people, but as they said, they simply removed them, vanquishing the one for the sake of the many. They had the obligation to maintain the world they had created, and they wouldn't let anything threaten that.

Zankou discovered a tomb detailing the Avatars' last attempt to create Utopia. He saw that in order to eliminate conflict, the Avatars not only took away free will, but the ability to feel grief, pain, or mourning. No one dies in Utopia, but merely "goes to a better place." Zankou convinced Leo to help him, and Leo agreed: he sacrificed himself to the Avatars, creating conflict by battling demons at a party held in the manor.

When his sons Chris and Wyatt couldn't stop crying over the loss of their father, Phoebe, who had been skeptical at first about Leo's dying warning, used her power of premonition and remembered all the losses they'd faced. She realized that Leo was telling the truth, and Chris and Wyatt were simply too young to act the way that the adults had been programmed to act. She helps Piper remember her loss of Leo, and Paige's loss of Kyle Brody. The sisters meet Zankou and learn of the making of the potions. Zankou found an ancient Egyptian Tomb, with all the drawings showing their history with the Avatars. Anubis, the Egyptian God of Rebirth, said "There is a price to pay for Utopia".

To the tone of Phoebe's argument that at least people knew what they were dying for with good and evil, the Avatars promised to rewind the world to as it was before Utopia was created, and said they would retreat until another time, where the people are ready to accept Utopia.

Being Summoned by Piper

In 2005, an Avatar appeared before Piper when the latter summoned her and an Elder. She demanded an explanation as to why the Angel of Death wanted to take Leo away. Though initially appearing at odds with each other, the Avatar and Elder didn't have the authority to answer her question, claiming that neither of them had the power to save Leo, as doing so would greatly disrupt the Grand Design. They gave Piper the information of a higher power who looks over the Grand Design, the Angel of Destiny.[9]

The Avatars were one of the many magical beings to gather at Cupid's Temple to discuss the threat of the Old Ones. During the meeting, Gamma acted as their spokesperson.[10] Gamma supported the decision to kidnap those affected by Prue Halliwell's magic and was present when the Tribunal tried to extract information from Tyler Michaels. He and other Avatar representatives were later slaughtered by Prue when she appeared at the temple.[11] As Alpha was not shown to be part of the Tribunal, it can be presumed that a faction of the Avatars still remains.

The power of the Avatars lies in their collective. As such, they possess a virtually unlimited number of magical powers. For this reason, only their most prominent powers are listed. When individuals join the Avatars, they strengthen the collective by adding their powers to it, amplifying each individual power and every member as a whole.

As an entire collective, the Avatars are extremely powerful. One Avatar alone was able to withstand the combined magical assaults of several Elders, all at the same time, without having the need to retaliate. Even Zankou acknowledged the extent of the collective's power, which was why he had to resort to underhanded tactics in order to undermine their agenda.

Though their generic powers are supposedly limitless, the Avatars themselves seem to decline from this way of thinking. Any manipulation of time, space and reality on their behalf drains the group of the magical power they have at their disposal, leaving them at a risk if they used it frivolously. For this reason, members are encouraged to not use their powers for personal reasons like Cole. There are also limits to what they can achieve, as seen when Alpha pointed out to Cole that Avatars cannot control love.

Avatars are neither good nor evil. They possess immense power and exist outside time and space. The Avatars viewed the constant battle between good and evil as pointless and enlisted Leo to convince The Charmed Ones to assist them in creating a perfect world. When the price for that perfect world proved too high, The Charmed Ones allied with the demon Zankou to undo the false paradise they had helped create.[12]

While immortal and virtually invincible as a collective, individual Avatars can be vanquished by an ancient Egyptian Potion. This potion was created by the mage Anubis when the Avatars tried to create Utopia in the time of Ancient Egypt. None of its ingredients are known. For this reason, only a few vials exist, most of which have been destroyed.

When the potion is thrown and breaks it releases grey smoke, which then enters the Avatar through both the mouth and nostrils, killing them almost instantly like a poison. Once the potion in inhaled, death is unavoidable, unless time is reversed. Kyle Brody tried to use the potion three times, two failed attempts to kill Leo Wyatt and a successful one, killing Beta. Unfortunately Brody himself was killed too in the process by Beta. 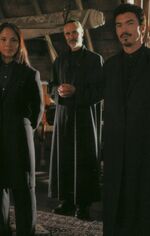 Avatar Beta inhaling the contents of the potion.

Alpha with Beta and Gamma 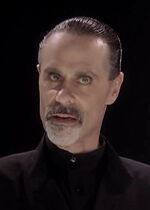 The Avatars appeared in a total of 14 episodes and 2 issues over the course of the series.