The attic of the Halliwell Manor

To keep the Book of Shadows and perform magic, as well as general storage

The Attic is located on the third floor of the Halliwell Manor on Prescott Street, San Francisco.

Aside from being used as a common attic for general storage, the attic is most known for being the location where the Charmed Ones and their family keep the Book of Shadows. Additionally, the attic is where the sisters performed a lot of their magic and various important events have taken place in the attic.

Phoebe finds the Book of Shadows 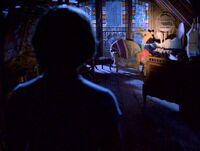 After Phoebe moves back into her childhood home with her two older sisters. She and Piper attempt to contact spirits using a spirit board given to them by their mother. However, to much of their surprise and horror, the board spells out five letters, A-T-T-I-C and therefore giving them the word attic. Phoebe being suspicious, goes up to the attic door, but it seems to be locked. When she starts to walk back down the stairs, it magically unlocks itself.[1] Phoebe then enters the room she thought was blocked off and suddenly a light shines over to a crate under a window. She walks over to it, and opens it to find a book; a book of witchcraft. She unknowingly then recites the first page of the book, giving her and her sisters their destined powers.[2] 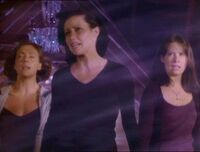 Soon after finding that the three of them are witches, they soon discover that Piper's boyfriend, Jeremy is actually a warlock sent to kill all three of them in order to obtain their powers. Once knowing this fact, the three run up to the attic and Jeremy shoots a ring of fire around them. Scared and terrified, Prue remembered the inscription on the back of the spirit board, and the three chant their first ever vanquishing spell, which causes Jeremy to erupt and eventually die.[3] 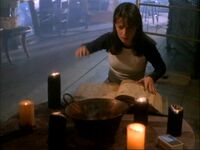 Piper cast her first spell on a waiter at Quake called Doug, who was clumsy and often dropped glasses and plates, causing much distress to Piper. It got to the point where her boss forced Piper to fire him, however she decided to cast the Charm of Confidence. However, she had doubled the ingredients which made Doug more confident and much more cocky then he originally was. She eventually reversed the effects of the spell.[4]

The Power of Three vanquish Shax 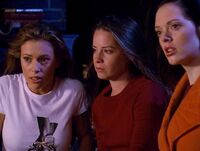 After the death of Prue Halliwell, Piper and Phoebe learn that they have a younger sister, by the name of Paige Matthews. Both Piper and Phoebe attempt to look for her, but Paige was already at the manor. Phoebe introduced herself to Paige, as did Piper. Surprisingly, when the two shook hands, a bright blue light shone through the chandelier, symbolizing the new power of three. Shax, the demon who had killed Prue, blasted through the doors. While Leo fended him off for a while, the sisters ran up to the attic and Piper flipped open the book to find the vanquishing spell. She finally finds it and the three successfully vanquish Shax.[5]

Phoebe's demonic boyfriend at the time, Cole Turner, had wanted to become a mortal ever since meeting Phoebe. Although the two pondered over the idea, Phoebe eventually made the potion in 2001. Finally, after some problems with a vengeful mortal named Emma, the potion was thrown at Cole while in his demonic form, Belthazor. This cause Cole to erupt in flames until his demon side had been vanquished for good. The flames eventually went out and Cole got up unharmed.[6]

The Source is Vanquished

After finding out the Source of All Evil had been sending the demonic attacks after them, Phoebe found, or wrote a spell in the Book of Shadows to vanquish the Source once and for all. The Source had other plans for the three of them. After successfully getting Piper and Paige powerless, and Leo almost dying, the Source finally entered the Manor to kill the sisters. However, Paige and Phoebe carry a wounded Piper up to the attic, and they say the vanquishing spell.[7] 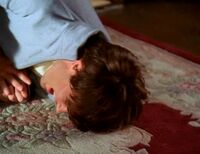 After finding out that Gideon was the one after Wyatt Halliwell and the one who ultimately turn him to the path of evil, Chris, goes up to the attic, to the Book of Shadows to find a way to stop him. He starts to hear distant creaks in the attic. He attempts to find the source of it, but suddenly, Gideon attempts to steal Wyatt, but Chris manages to fling him out of the way. Unfortunately, to get Chris out of the way, Gideon stabs Chris in the stomach, injuring him severely, and then escapes with Wyatt.[8] 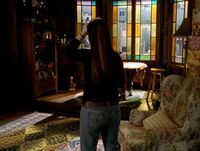 After falling from grace and becoming mortal, Leo found himself somewhat useless with the demonic attacks happening nearly every day and finally decided to try something else, like cleaning the attic. It's unknown how long exactly it took. Piper was then amazed to see how clean it was, however she was worried why Leo decided to do it and insisted she liked how it was before, mainly because she knew where everything was. He also bagged different things, like corks for potion bottles and scrying crystals.[9]

Uses of the Attic

Retrieved from "https://charmed.fandom.com/wiki/Attic?oldid=433941"
Community content is available under CC-BY-SA unless otherwise noted.