4300066
All Hell Breaks Loose is the twenty-second episode of the third season and the 66th overall episode of Charmed.

When Piper and Prue are exposed as witches, Phoebe sacrifices herself to the dark side to save them but the deal destroys them all.

Demonic hitman called
out for only the top
assignments by
the Source.

Corporealizes out of
wind and air. Method
of attack is a ferocious
blast of wind that can
be lethal to its victim.

Is a demon of
Evil winds that blows
that which forms below
no longer
may you dwell
death takes you
with this spell.

The spell to vanquish Shax requires more than one witch to be succesful. When Phoebe cast it by herself, she only wounded Shax, making him turn into the wind. Prue and Piper later cast the spell and successfully vanquished him.

Evil wind that blows,
That which forms below,
No longer may you dwell,
Death takes you with this spell. 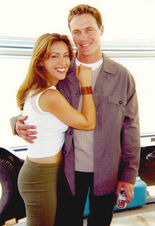 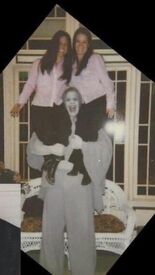 Piper: Ahh, what happened?
Leo: You guys almost died, that's what happened.
Piper: Yeah, well, what else is new.

Piper: Hello Leo, nice of you to orb in. Where've you been?!

Darryl: Whoa, Prue, Prue. Even if you can save your innocent, that still doesn't save yourselves.
Prue: Yeah, I—I know that, Darryl, but first things first, all right? Try and buy us as much time as possible with your captain as you can. (to Leo) And you, why don't you get back up there and whitelight a fire underneath your bosses' butts?

Dr. Griffiths: What are you?
Shax: The end.