"Uh, excuse me. When you said, uh, sea hag, did you mean like old woman hag or evil magic hag?"
—Piper to Mylie

A Witch's Tail, Part 1 is the first part of the season 5 premiere and the 89th overall episode of Charmed.

The Charmed Ones struggle to help a beautiful mermaid from losing her immortality, but are hindered by morphing mishaps and a fiendish water demon Sea Hag.

An entry about The Sea Hag is mentioned, though it is not seen. It told that she had power of her natural environment, but did not mention specifically what that meant.

Sea Hag
The Sea Hag is a malevolent magical being
known for tempting Mermaids to give up
their immortality for the love of a human.
She then collects their immortal essence for
barter with powerful demons. She possesses
a vast array of powerful magic, drawn from
the brine of the Sea.

Water, rise up from the sea,
Find the one who fled from me
Follow where the winds are cold,
Then fall tenfold like days of old.

To Track the Sea Hag

Powers of the witches rise,
Find the hag who speaks in lies
Balance chakra, focus chi
Lead us through the cruel, cruel sea. 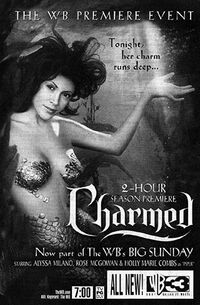 Retrieved from "https://charmed.fandom.com/wiki/A_Witch%27s_Tail,_Part_1?oldid=434591"
Community content is available under CC-BY-SA unless otherwise noted.