"A Paige from the Past"

A Paige from the Past

4301070
A Paige from the Past is the 10th episode of the fourth season and the 76th overall episode of Charmed.

Haunted by her parents' tragic deaths, Paige travels back in time while Piper must prevent the marriage of Phoebe and Cole, whose bodies are inhabited by outlaw ghosts. 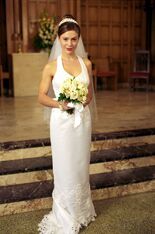 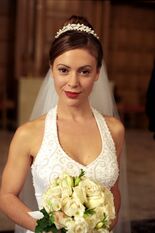 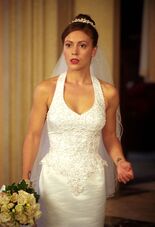 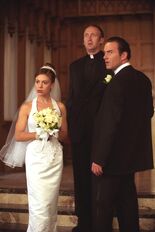 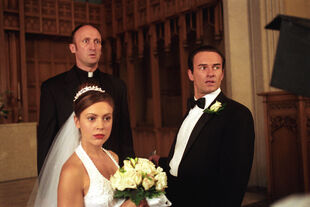 Piper: Oh, my god, Cole. How's my car?
Cole: It's fine.
Piper: That is the first and last time you borrow my car, got it? Good.

Leo: You owe me, Clyde. Or do I need to remind you of your client that I healed? The one you returned from the past—on the edge of a cliff? I believe there were thirty-two broken bones.

Leo: Rough ride. Are you okay?
Paige: Yeah. I'm all right. I'm all... (She looks into the mirror and sees that she is a teenager again.) ...wrong! Oh, my God. I'm so screwed. I'm supposed to come back as a ghost. Not a ghost with...braces?
Leo: You're meant to relive the experience, Paige. Not observe it.
Paige: Yeah. But I just wanted to come back and watch me make sarcastic comments about my lack of style.

Darryl: Look, I am sick of you and your entire dysfunctional family unit. I will not falsify evidence. I am a cop.
Piper: Okay, cop, do I need to remind you that you bailed Cole out of jail last night?
Darryl: So?
Piper: So I was wondering what you were going to tell your captain when he sees Cole on the surveillance tape.
Darryl: What are you waiting for? Go get the damn tape!